‘Europeans Only’: Coming to Terms with Racial Segregation in PEN SA’s Past

Do advocates of “free expression” always end up defending free expression? It’s a difficult question to answer, not least because many people think of free expression in different ways. Some people equate free expression (or FX) with the absolute right to say or do what one likes; some people believe it to be a state of social equality, where everyone has the same opportunity to express. Some advocates of writers in prison or exile may have also been racist or sexist, in line with the prevailing attitudes of their times. What do we do with such histories?

PEN South Africa is currently collaborating with researchers from the Writers and Free Expression (WFE) Project, to help them answer some difficult questions about the roles that PEN Centres and their members have historically played in society. In particular, we’ve been opening our archives to find out what role our members and our organisation have played in ensuring, or obstructing, equal rights to expression for South African writers historically. (You note that we say “PEN Centres”. That’s right – the current PEN South Africa is not the only PEN Centre that has existed in SA. There have been many iterations of PEN Centres in SA over the past 90 years.)

The WFE, to quote its mission statement, “looks to the role of non-governmental international writers’ organisations, primarily but not exclusively PEN International and its Centres, in order to understand what kind of collective agency writers have in shaping or influencing the right to free expression. The project brings together scholars, writers and activists with particular expertise in three geo-political areas, the UK, South Africa and India, in order to investigate how international instances of censorship and the forms of resistance it has provoked have played out in different parts of the world. While organisations like PEN have mobilised writers to campaign on behalf of writers in exile, of imprisoned writers or censored works, they have also been forums for passionate disagreements about the boundaries to free expression, the universality of rights, the function of literature, and the public role of literary intellectuals.”

Of course, such research brings about some unpleasant truths about the history of PEN Centres in South Africa, for governmental racism and segregation often found their concomitants in non-governmental organisations. For example, as the following post relates, PEN SA Johannesburg, despite insisting on non-racialism as it was entrenched in the PEN Charter, was generally not open to Black writers during its almost half-century-long existence.

The research about South African PEN Centres, along with other research from PEN Centres and other FX bodies around the world, will be presented in 2020. Until then, here’s a thought-provoking tidbit. We’ll let Kate Highman, the South African research associate of WFE, to take it up from here.

There is a telling moment in the archives of Johannesburg PEN – the iteration of it that ran from the 1927 to 1974 – where a funding application to the Department of Education, Arts and Science lists as the persons whose interests PEN represents as ‘Europeans’, rather than ‘non-Europeans’.

Telling, as the Centre generally insisted on its non-racial bona fides  – after all, the 1948 PEN Charter pledged its members ‘to do their utmost to dispel all national, race and class hatreds’ and stipulated that membership will be open to all, ‘without regard to nationality, race, colour or religion.’ (In 2017, the Charter was reformulated so that members are now pledged to ‘dispel all hatreds’, not confined to those of nationality, race, colour or religion.)’

Nevertheless, the Centre remained almost exclusively white for its entire duration –with at most three members of colour over its span of nearly half a century.

Even in the early 1970s, when the dwindling organisation was desperate for new members –  cold-calling various white individuals to solicit their membership – they clearly struggled to extend these invitations to writers of colour.

Minutes of a 1972 meeting show extended debate about whether to invite black author ‘Oswald Mshali’ (sic) to join PEN, as well as an unusually direct glimpse of the racism that appears to have subtended its ostensibly hapless racial exclusivity: ‘several members had indicated that if Non-Europeans joined they would resign’.

Whether Mtshali joined is unclear from the archives (in the end it was ‘unanimously agreed’ to invite him); either way, the organisation was shortly defunct. Had Mtshali declined membership, it would not be surprising given PEN’s earlier treatment of him.

While a contributor to the PEN publication New South African Writing (1969), he was not invited to its launch party, for this would have necessitated holding the event at a venue open to all races or applying for a permit for him to attend – something the Chair, Edgar Bernstein, did not do, instead writing to Mtshali that while the Centre would have ‘liked’ to invite him, PEN was bound by ‘the laws of the land’.

Reproduced with the permission of Historical Papers Research Archive, University of the Witwatersrand, Johannesburg (Collection A977; folder 5.13)

Going through the Centre’s papers, it becomes clear that again and again it is PEN’s adherence to petty apartheid and the letter of the law that helps keep it so overwhelmingly white. And ironically, it is the sociality that lies at PEN’s core (it was originally conceived as dinner club for writers) that enables this. For the PEN ‘luncheon’ (it’s never simply ‘lunch’) or ‘sherry party’ is invariably held at a ‘whites-only’ venue.

The fundamental bad faith of hosting PEN events in whites-only venues is something that Nadine Gordimer pointed out in 1965, in an archly polite letter explaining her refusal of their invitation to host a lunch in her honour:

‘For some time it has seemed to me to be improper and distasteful that PEN – a non-racial, no-colour-bar body by constitution – should hold official gatherings in hotels and restaurants which, in accordance with licensing laws, are reserved for the use of white people only. I feel there is little excuse for us to meet in self-congratulation, as it were, while we have so little cause for congratulation where efforts to make the comradeship of South African writers non-racial are concerned’. 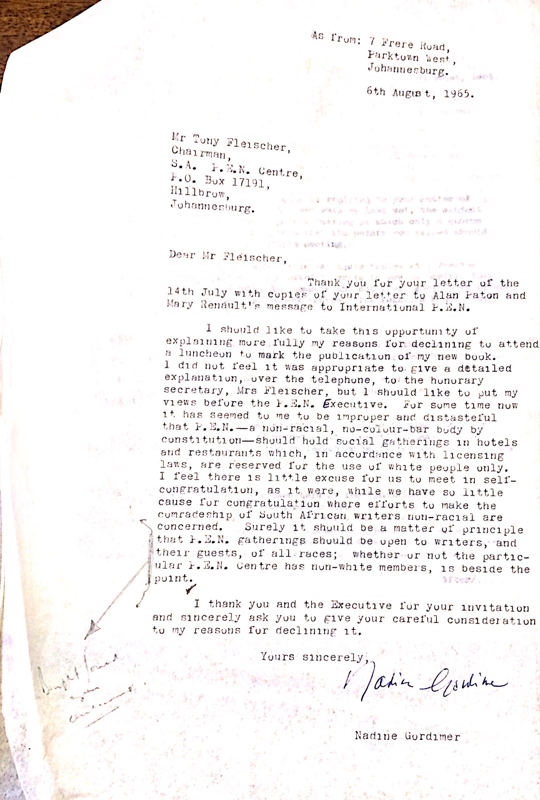 Reproduced with the permission of Historical Papers Research Archive, University of the Witwatersrand, Johannesburg (Collection A977; folder 3.7)

Gordimer’s phrase ‘meeting in self-congratulation’ sticks, as does her barb about what is ‘(im)proper and (dis)tasteful’. For she not only touches here on the Centre’s inflated sense of its own importance, but does so in the terms that matter most to it.

Leafing through the archives it becomes clear that the organisation is animated by an almost neurotic concern with what is ‘proper’ and ‘tasteful’.

This is evident in its anxiety that membership be limited to writers of sufficiently ‘literary’ merit (a mystical term of much confusion), as well as the menus for the luncheons and sherry parties, the choice of venues, the official letterheads, etc. It is an anxiety and self-importance very much rooted in the Centre’s awareness of itself as part of a prestigious international organisation — one, moreover, of European origin, with its headquarters in England, the imperial centre.

Reflecting back on the funding application which  describes the people whose interests PEN served as exclusively ‘Europeans’, it is telling not just because it is unusually frank about the Centre’s actual membership, but because of the way PEN inscribed itself into South African society — at least until 1978, when a new, black-led PEN emerged in Johannesburg.

Answering to, and in the language of, the white supremacist government, the organisation (as constituted by the Johannesburg and Cape Town Centres and the Afrikaans Skrywerskring, which disaffiliated from PEN in 1967) arguably not only paid it lip service but – more troublingly — served to uphold, or at least legitimise, the status quo of European domination in South Africa, using ‘literature’ to do so.

All of this raises a number of questions that we hope to consider in conversation with the current, very different South African PEN Centre, in a conference planned for September 2020: